Artist & Designer Michael Gray knows that art is all about making statements. Born and raised in Miami, Gray grew up with a paintbrush in his hand and has been creating works of art that he says were born of the drive to create. “I’ve been drawing and painting since I could hold a pencil,” he says. “Nothing has changed since then and I doubt it ever will.” As a young artist getting his start, Gray spent most of his spare time in or around the ocean, either fishing or surfing. In 2004, he won the Congressional Art Award, and the following year, he won a full scholarship to the Art Institute Of Miami.
Since then, there’s been no stopping him. Recalling his early days and unceasing love for the sea, he’s recently turned his attention to raising awareness for the well-being of its inhabitants. This past year, Gray created a mural to raise awareness through art for Lolita, an orca whale held for entertainment purposes at Miami Seaquarium for more than 40 years. He first saw the whale as a child visiting the aquarium, and says of his first encounter: “I’ve known about Lolita my entire life…I have photo albums from the early ‘90s of her jumping out of the water and splashing everyone in the crowd and I’ve personally lost a few cameras to such splashes over the years.”
As he grew older, however, he says, he became aware of anti-whaling groups, but it had never occurred to him until recently that there was a movement against trapping whales for viewing pleasure. “I was quite naive to these realities until I started working with The Peace Mural Foundation,” he says. The mural dedicated to freeing Lolita was unveiled in October, and The Peace Mural Foundation, which sponsored the project, used it to promote awareness and petition the park’s owner to change the situation. In short, Gray’s work is making a difference.
Though most of his work is done in graphite, acrylic and oils, he also works as a graphic and a web designer, a combination that’s helped him hone his skills over a variety of mediums. The open-minded artist is currently getting his Master’s at Florida International University, and explains that the most fulfilling part of his work is yielded from the finished product. “If people I never met before can get lost in my paintings, I feel I’ve fulfilled my obligation as an artist,” he says.
Never one to rest, the energetic artist says he’s eager to get back in the studio and create additional pieces; his upcoming series of paintings will be an exploration on the subject of body language; ImageChemist.com. 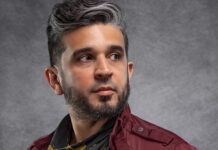