Of Uruguayan and Chilean descent, and born in New Jersey, it was a 4-year-old JC Sanhueza who was offered what most of us consider the opportunity of a lifetime: To leave the frigid northeast and enjoy life in the colorful confines of a then-emerging Miami Beach. Sanhueza’s reaction couldn’t have been better. “I grabbed my plastic shovel and pail and said ‘Take me to the big sandbox!’” Armed with the can-do attitude and sense of humor this anecdote suggests, Sanhueza’s life’s work has been liaising tourists and locals alike through some of the most convivial nights of their lives. Now seen often behind the bar of chicly creative RedBar Brickell and up-and-coming Miami Beach hotspots Lutum and El Grito, Sanhueza has a unique perspective as to what attracts people to our metropolis. “This city never stays still,” he says. “I first tended bar at the The Last Supper, and Miami has come a long way since then. There’s always new restaurants, bars, clubs and shopping meccas being built so there’s always something new and exciting going on.” A mixological maestro appreciative of the classics, Sanhueza’s favorite new trend is anything but. “I love the way the classic cocktails have come back in the last few years,” he says. “The first 10 years that I tended bar, you would rarely get someone who ordered an Old Fashioned or a Negroni…in many ways, the mixology world has begun to follow in the footsteps of the culinary world. Nowadays, you’re only really held back by the barriers of your own creativity.” 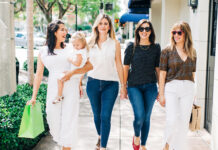