The word unique seems to be used for just about every new luxury hi-rise breaking ground in South Florida — whether it’s warranted or not. In the case of The Bond, “unique” is actually an understatement. “We recognized the importance of a distinctive and distinguished boutique lifestyle in the heart of Brickell,” says Paulie Hankin, Director of Sales for The Bond. “It was important for us to set the building apart with a ‘British Glamour Meets Brickell Chic’ branding.” This has been reinforced with the King George era London Phone Booth they commissioned with British Telecom that arrived to Miami for Art Basel. It was meticulously refurbished to museum-quality standards during the course of 4 months and will be a permanent art installment on Brickell Ave. when the building is complete. The development is the brainchild of Rilea Group, a full-service real estate firm with a 30-plus year history in South Florida that has seen the delivery of some of the region’s most successful residential and commercial projects, including 1450 Brickell office tower, One Broadway luxury apartments and the Sabadell Financial Center at 1111 Brickell Avenue. Rilea Group is partnering with private equity investment firm MDR Toledo, a subsidiary of Spain-based MDR Americana. “The Bond on Brickell is already becoming the address of choice for residents seeking a luxury residence with proximity to Downtown Miami’s most desirable shops, restaurants, and arts and entertainment venues,” says Rilea Group’s VP Diego Ojeda. “Having the luxury of an actual Brickell Avenue address is very rare these days and something buyers will continue to see value in.” “All the residences at the 44-story The Bond luxury tower were created to appeal to a discerning worldwide clientele.”

Adds Cervera Real Estate Managing Partner Alicia Cervera Lamadrid, who is leading the sales effort for The Bond: “The Brickell brand resonates internationally, so the start of construction on The Bond is in many ways a symbol of Downtown Miami’s rebound,” says “Brickell is synonymous with an upscale, urban lifestyle that appeals to buyers from around the world and The Bond reflects the no-nonsense, classic timelessness and elegant approach to development that is the driving force behind Rilea Group. That’s a powerful combination in a competitive market.” Though it has British appointments right down to the custom furniture, the 328 residences in this 44-story luxury tower are set to appeal to a worldwide clientele. The goal is to create a sophisticated oasis away from chaotic and hectic city life with modern upscale amenities starting with a resident lounge offering refreshments, newspapers and daily Bond Tea in the lobby upon arrival at the building. The feelings of serenity and pampering are further enhanced on the pool deck with its painting-worthy views of the city and bay as well as an impressive waterfall that provides a soothing symphony that no high-tech sound machine can duplicate. Other posh amenities include super-cabanas with outdoor grills, a circular outdoor fireplace, a state-of-the-art health & wellness center with Life Fitness equipment, The Parliament Lounge with its cinema featuring 3D surround sound and digital projection technology, the Executive Business Center for when you don’t want to go into the office, and a Children’s Room. The property offers WiFi in the common areas and offers AirPlay in The Parliament Lounge including Pandora, Spotify and shared playlists. “The Bond aims to go above and beyond by crafting homes that provide enduring satisfaction with skyline-transforming architectural icons.”

What’s more, The Bond is in the center of the pedestrian-friendly Financial District with banking, business, entertainment and culture close by including Mary Brickell Village, the up-and-coming Brickell City Center, Adrienne Arsht Center, and the new Science & Art Museums. You can also get your culture on-site and view The Bond’s private art collection highlighted by sculptures by Miami’s Tatiana Blanco and curated original works by legendary British Photographer Terry O’Neill. “In real estate it’s always about location, location, location,” says Hankin. And The Bond is among a handful of new construction buildings in this cycle that can boast that fact. Best of all, it comes from a solid developer with a stellar reputation in this market. The Bond is their 5th building in the Brickell neighborhood alone — Hankin reports they had no construction financing and actually had their construction permit the day they started sales. “The Bond embodies the most important factors in Real Estate 101,” she says. “Location: A Brickell Ave. address. A quality developer: One with a history of developing the future with an old-world sensibility…conscious of the method, they conceive the project from inception to delivery. The goal is to create not only what buyers want, but to go beyond this by crafting homes that provide enduring satisfaction for the end-user and delivering architectural icons that transform the skyline. Finally, there’s Comfort in luxury: White-glove valet and concierge services, the best parking-to-unit ratio in the neighborhood, fantastic lifestyle experiences, and finished units with the utmost in European appointments.” Moreover, Hankin says the developer wanted to construct a high-quality product at a price unrivaled by the competition. This includes their mission for environmental awareness and responsibility. In fact, The Bond is the only LEED-compliant residential condominium building currently under construction in the neighborhood. To date, the uniquely British product positioning has drawn many international and domestic buyers. Along with companies such as Jaguar and AFEX, they were one of the major sponsors for Brit Week this year which drew thousands of people to Miami and into the project. “We were the only real estate venue visited by David Beckham this past week in his bid to expand Major League Soccer to Miami,” reports Hankin. “Real Estate has historically been a very stable investment,” concludes Hankin. “Inventory is at an all-time low in Miami-Dade. Through the diligent efforts of the real estate community, the market absorbed the 40,000+ properties on the market during the downturn in record time. Now Miami is ready for its next renaissance.” 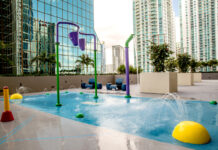 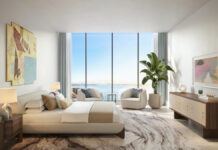 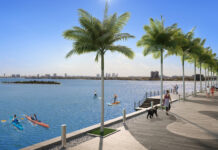